After a restless night disturbed by tentmate Joe’s frequent and noisy vomiting, we started the second proper day of walking with the knowledge that this would be perhaps the hardest thing many of us had ever done — and possibly the hardest thing we would ever do.

We had camped overnight at an altitude of 2700m at a place called Wayllabamba, which in the Peruvian Quechan language means “grassy plain”. Both of these are quite safe, reassuring facts that you take comfort in on the trail. The altitude is low (although that is still double the height of Ben Nevis, the highest mountain in the British Isles), and the name tells you how it’s nice and flat. This contrasted with the focal point of the day: Dead Woman’s Pass, standing at an altitude of 4200m, over three times the height of Ben Nevis and nearly four times the height of Snowdon*.

It wasn’t long before the ascending trail took us up through what is referred to as “cloud forest”, where the forests are persistently misty — this made it cooler for the uphill hike, but the altitude was still tough. Joe hadn’t recovered from the night before, and was struggling to continue going since he couldn’t even keep water down. We were lucky that it stayed dry for us, since this part of the trail had a reputation for being hard going when it got muddy as well as steep.

I remember one stop we made for a rest and water, which really symbolised the contrast of the traditional Peruvian society and the “modern world”. We stopped to regroup and rest, and a few feet away, under a tree sat two Peruvian women in traditional dress, with their donkey. And a table selling bottle water, Coke, chocolate, Powerade and various other delicacies. Every now and then the donkey would wander closer to one of the women, and she’d hit it with a stick. I got the impression the woman was telling the donkey to go away, but maybe it was the other way round — the donkey enjoyed it, and every now and then just had an urge to be hit with a stick again, whereupon the old lady would oblige. 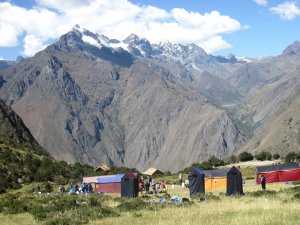 Lunch a couple of hours later was a beautiful lush valley, with views of snow-capped peaks and the heights of Dead Woman’s Pass lying ahead of us. Joe was in a bad way. He was dehydrated and weak, from being unable to keep anything down but still being determined to keep going. I think the trail and the long months of preparation did that to you: giving up was not an option. If I thought I had things bad with dodgy knees and a bad foot, Joe had to be put on an intravenous drip in a tent.

When I arrived at the lunch stop true to form our team of trusty porters had already erected the three group dining tents for us, as well as the cooking tents and done all the cooking — and there was still a few minutes to go before meal time. Most others had been there a while longer than me, but I was perpetually slow. It’s now such a bad way to take the trail, you get the opportunity to take in all the sights around you — which never have the chance to become familiar or run of the mill.

I encouraged a fellow trekker to venture in to one of the surrounding fields where llamas (or maybe alpacas, I can’t tell the difference) were peacefully grazing. I had been tasked by Ali to hug a llama for her, and I was determines to meet my obligations, and have a photo taken to prove it. Unfortunately, the llamas had other ideas about this. They might be big. And smelly. But they are also still timid of people, and weren’t keen on the idea of being hugged by someone who hadn’t showered in a couple of days. I settled for a photo near a llama instead, though I won’t post it since it’s not a very flattering picture — and I don’t look a whole heap better.

Lunch was packed with carbs — the now-usual selection of dishes ranging between soup, chicken, white rice and traditional Peruvian dishes. It was delicious, and best of all plentiful — and we needed it, since Dead Woman’s Pass still lay several hours ahead and several thousand meters above us. 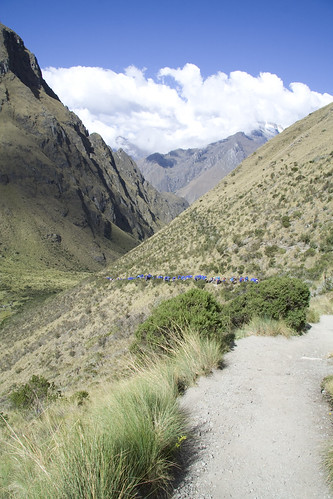 After lunch the trail got steeper and relentless, there was often barely enough room for two people to walk side by side, when there would come up the mountain a shout of “Porters!”. Everyone would move to one side to let these Peruvian supermen past — with port-a-loos and stoves on their backs and nothing more than sandals on their feet.

The altitude made the trek hard going. We’d be able to walk no more than a few minutes before having to stop to catch our breath — the thing about altitude was that the air literally did feel thinner, you could take long, deep breaths but the air just didn’t go so far. Your heart would pound, your head would thump, and you just had to stop and let everything settle — no amount of eagerness or speed would get you up the mountain any faster.

With the altitude came the cloud, and once we reached Dead Woman’s Pass (so-called because it is said to resemble a dead woman lying on her back, with the view of two mountainous peaks resembling breasts) it got cold very quickly. We all assembled together to appreciate what would be the highest — although not necessarily the hardest — point of our trip. The views were limited by the cloud around and below us, and strangely reminded me of Dartmoor — probably because of the cloud/fog, rock and desolate landscape. On many of the surrounding hills were small piles of stones, not unlike the cairns found in the British Isles — they were apparently expressions of wishes by Quechan travellers, who would return and add another stone to the top of the pile when their wish came true.

Getting to the top of Dead Woman’s Pass was only half the battle — there was still a 500m descent to camp to go. While the ascent was hard-going because of the altitude and steep climb, descending is often just as hard, and the relentless steps are torture on your knees — and like with the ascent, you can’t speed up, even if you want to, and know you are against the clock to get into camp before dark.

The second night camping was in the Pacamayo (or “sunrise”) valley, where instead the sun was quickly setting. My tentmate Joe (who had been carried at one point on the steepest part of the trail uphill) was already in the tent and his sleeping bag and fell sound asleep almost as soon as I got back. After a hard day, many of us were a lot more tired than the night before and went to sleep right after dinner.

The next day was promised by some to be the hardest, with another very early start. 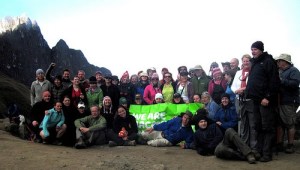 *Readers outside of the UK: please feel free to chip in with how this compares with mountains you are more familiar with — I appreciate the UK isn’t known for its mountainous terrain.